CHANTELLE
CABUSAS
STUDENT BIO:
Chantelle Cabusas is an emerging creative from Sydney with skills across graphics and photography, fashion, food and interior styling. Her interests of streetwear and surrealism have helped build a foundation to her design identity and have led to the establishment of her personal brand ‘ĆHAN - Chantelle Cabusas’ in 2018.
The projects created by ‘ĆHAN’ incorporate elements of androgyny and juxtaposition relating diverse objects together such as fashion and food.  Her work looks closely at the links between shape, form and colour in seemingly opposite subjects, creating strong editorials which grabs the viewers’ attention and compels them to linger over the unusual combinations. She believes when something is visually re-contextualised, we see it afresh.

PROJECT STATEMENT:
Blue is a resonant colour which can be simultaneously energetic, calm and spiritual, and which consistently appears on international fashion runways. In my fashion editorial; ‘System Blue’, I have explored the various characteristics of blue, manifesting tranquility and style, and making a connection to the ocean and the sky. A split complementary scheme including purple and orange adds contrast and zest to the images and illustrations. The combination of the atmosphere and the marine environment, create a narrative of space under water. Overall, the editorial experiments with the relationship between food styling and fashion styling with elements of surrealism and streetwear.
As a stylist and photographer, the design process entailed sourcing work from young emerging fashion designers and high street brands, then manipulating the scale and layering colour within the images. The imagery looks closely at familiar objects at a grotesque and monumental scale. It encapsulates the details of the scorpion fish, sardine, oyster and octopus which also correspondingly align with my mixed media illustrations. ‘System Blue’, is a concept which invites its viewers on a journey where two worlds collide; out of this world, through fashion and into the deep blue sea. 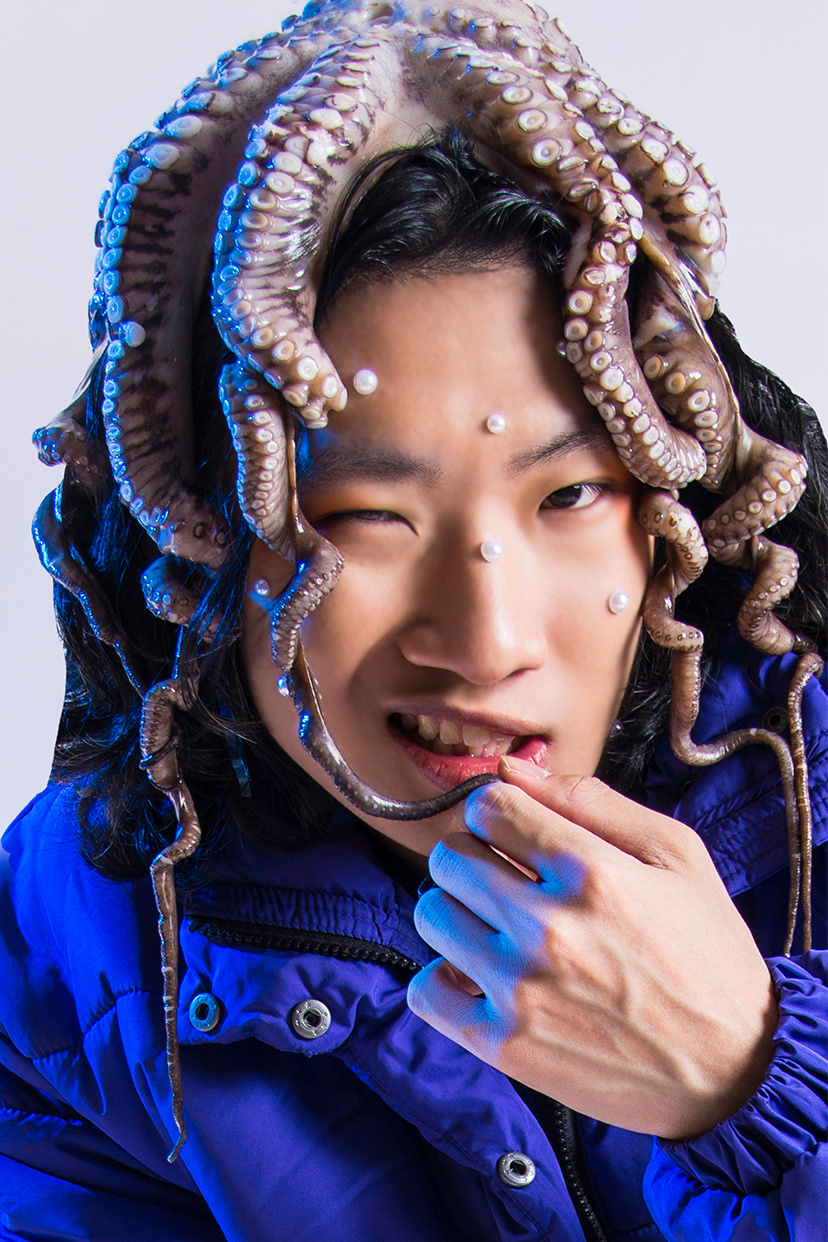 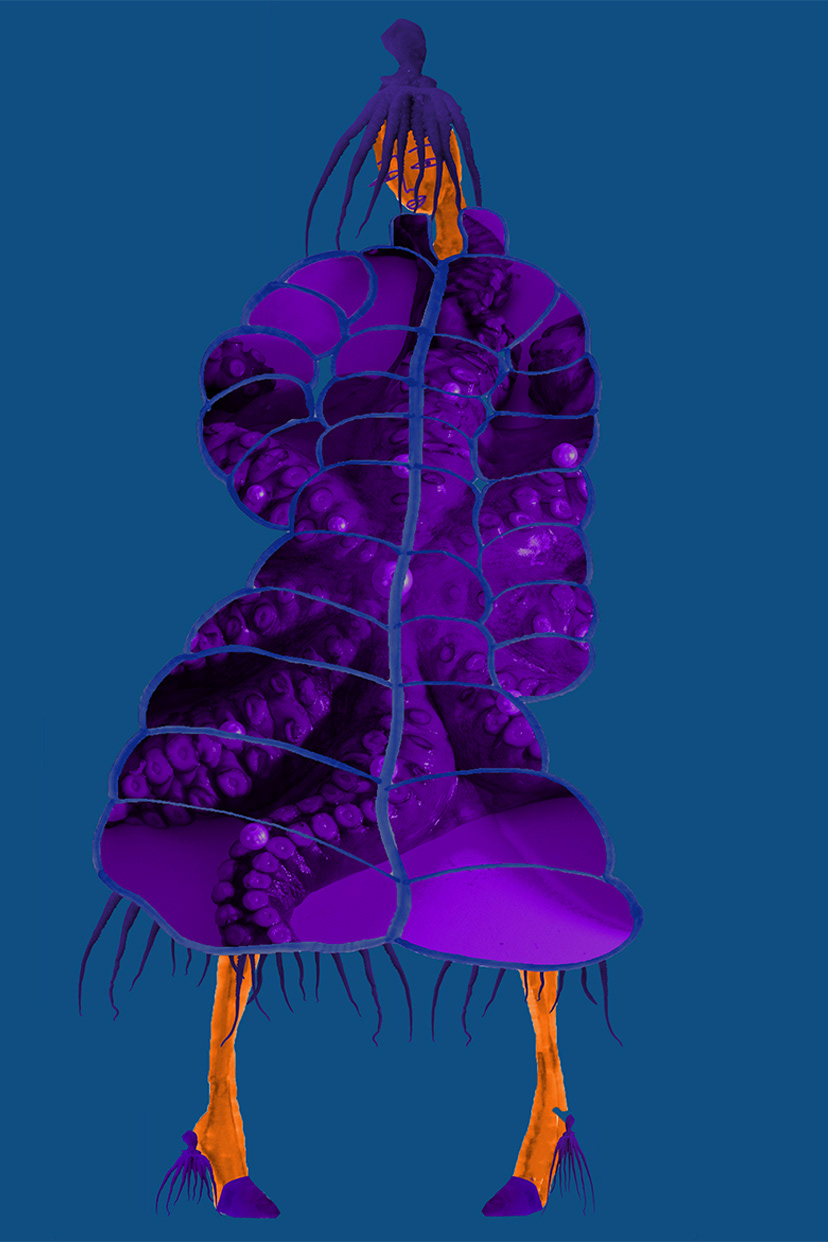 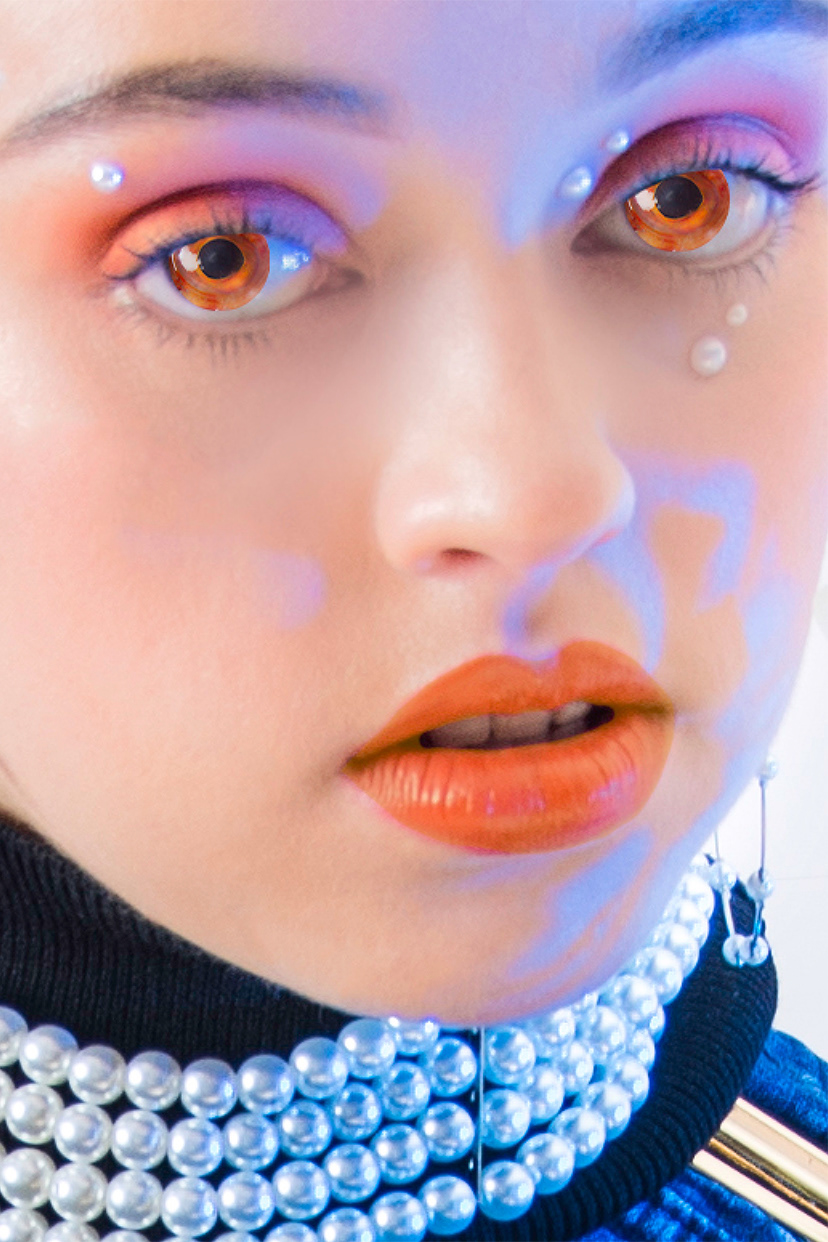 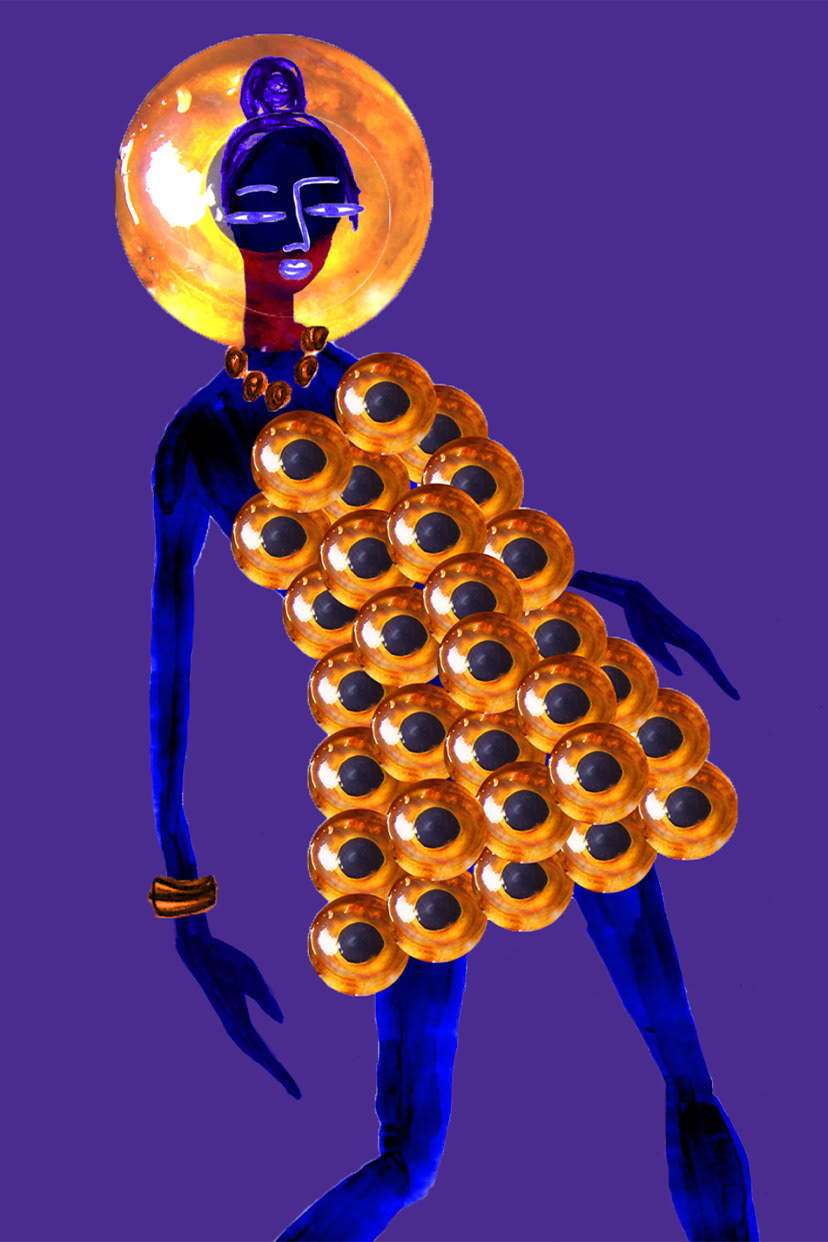 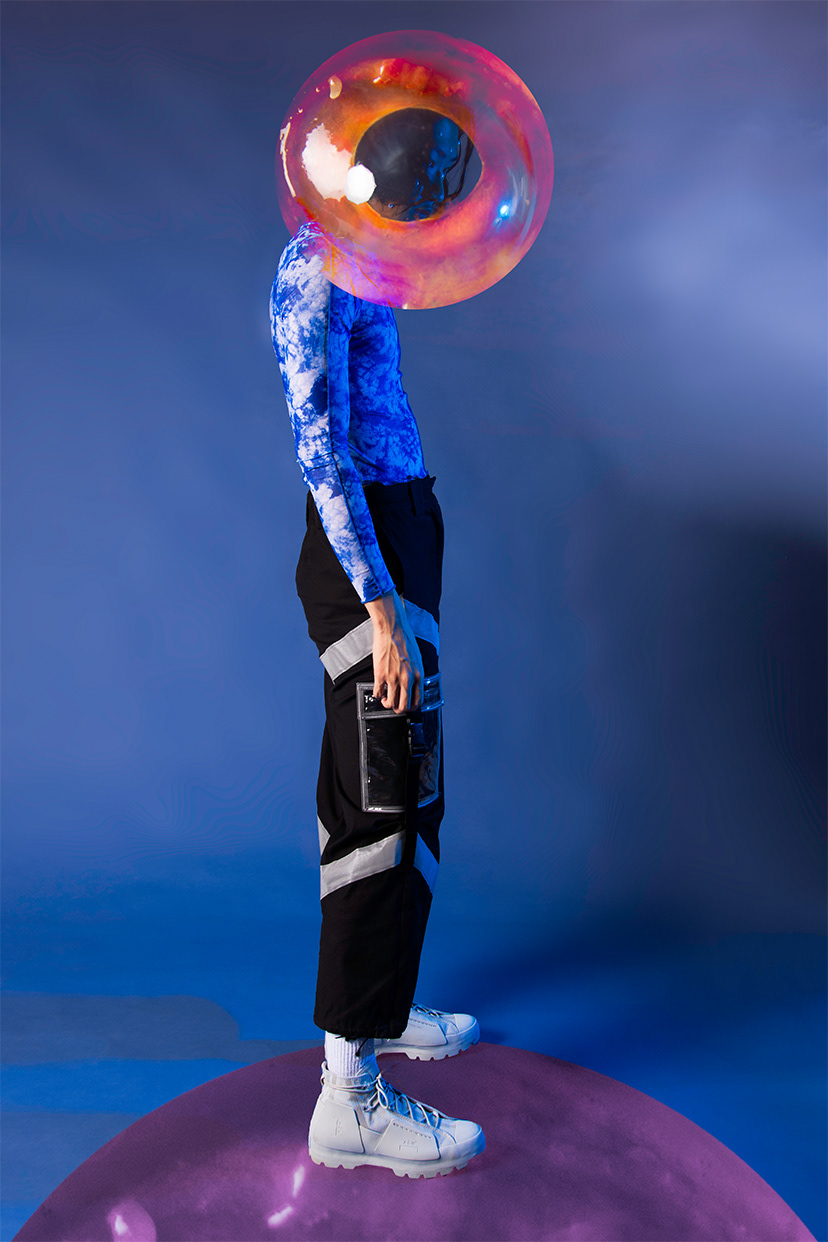 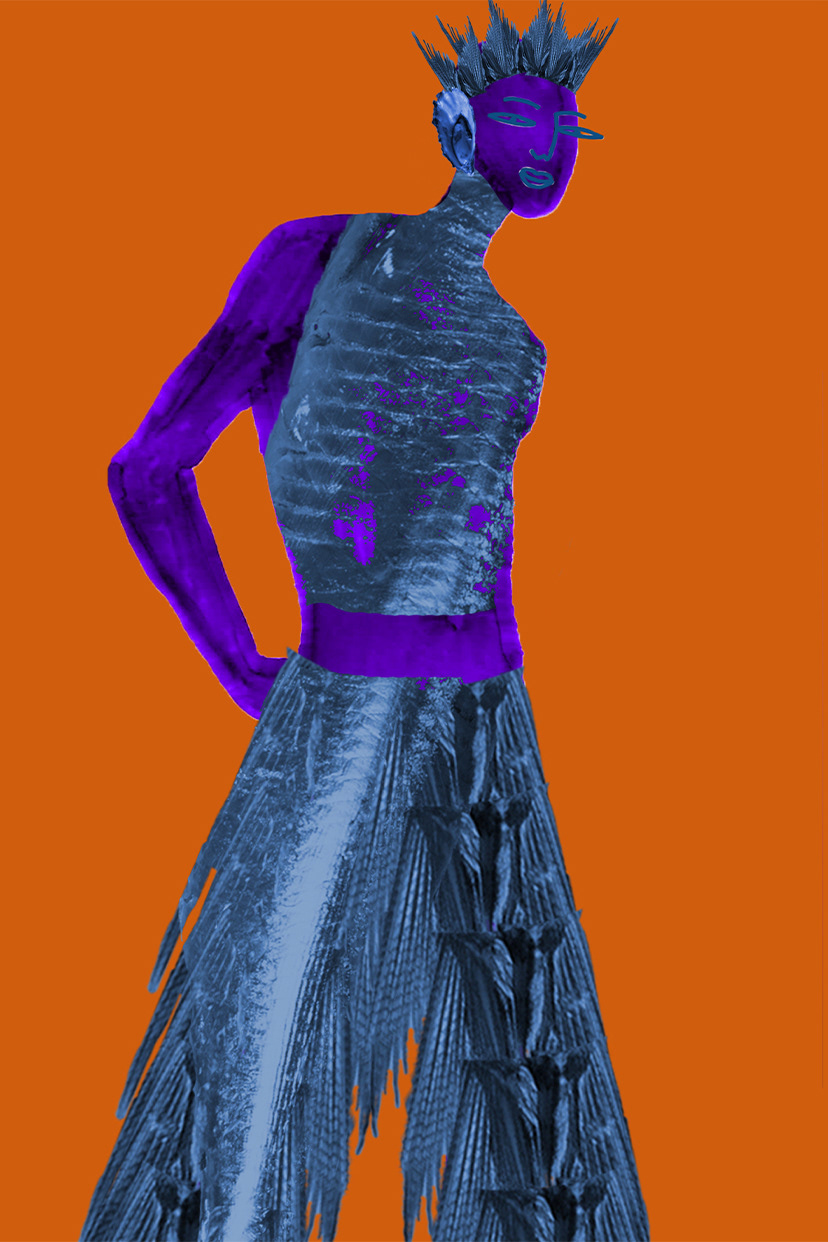